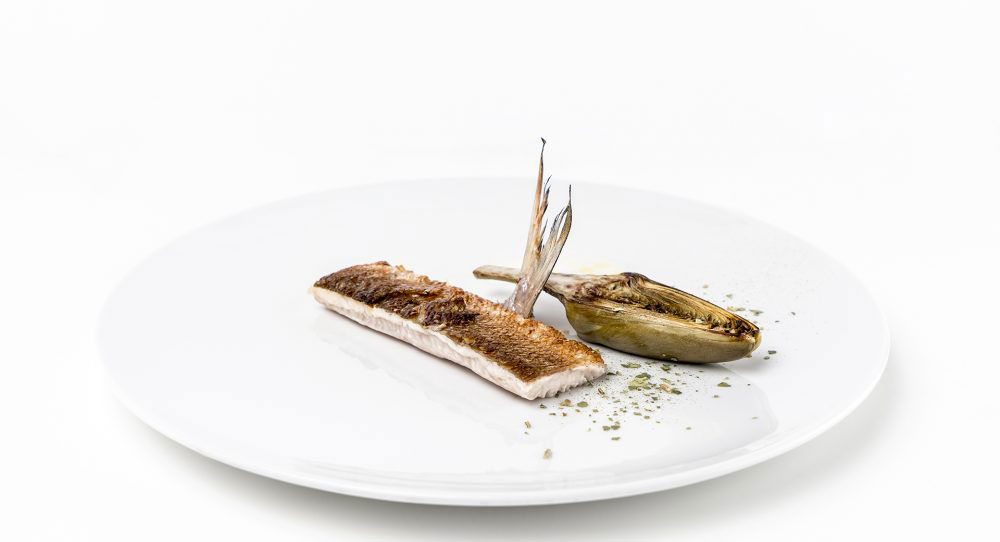 ALMOND MILK: blend the almonds with the water and sugar in the thermomix, then pour into a cheesecloth and strain.
LAUREL OIL: pour the oil and the laurel leaves in the thermo, heat to 60°C and blend. Strain and keep in fridge.
ARTICHOKES: cut the stalk around 2 cm away from the bottom of the artichoke, remove the outer leaves and cut off the top part of the artichoke with the thorns.
Sprinkle with Cervia salt and place the artichokes in a vacuum sealing bag (for cooking purposes) with the cocoa butter.
Seal and cook in the pasta pot at 100°C power 1 for 1h. Check if done and leave to cool in the blast chiller.
Remove the cocoa butter, strain and leave until it sets, then remove any water.
In the meantime, clean the artichokes and store them in a container with the cocoa butter used for cooking them.

WHITEFISH: fillet the whitefish, remove the bones and marinate in a mixture made of

Remove the fillets from the marinating mixture and dry them well, then smoke the fillets slowly for around 1h.

CRUSCHI PEPPERS: fry the cruschi peppers in oil and leave them to dry in the dish warmer.

ASSEMBLY: slice the whitefish, reliven the artichokes and heat them for a few seconds in a salamander. Place the almond sauce, artichokes, sliced whitefish and laurel oil on a plate. Finish off the place with Cruschi pepper chips, chervil and cress.