The History, Architecture and Traditions of the Garda Lemon Groves.

Lake Garda, particularly along its western shores from Limone to Salò, boasts some unique architectural gems, silent witnesses to a past age and its culture: these are the remains of the lemon groves.

Citrus fruits originally spread around the world from the Far East, first coming to Europe with the Arabs around 1000 AD. Some historians claim that Sicily was the first Italian region to grow them, “probably under initial Islamic influence and then later under Norman rule”. For centuries oranges and lemons were widely grown in Southern Italy and along the Amalfi coast, as well as on Lake Garda at the foot of Mount Benaco. A minor miracle made possible by the patient, ingenious work of sailors-turned-gardeners who managed to grow citrus trees on the terraced slopes of the upper Garda. 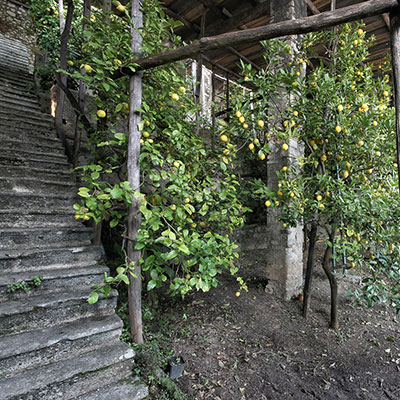 Water from a local stream, a sheltered valley, a sloping hillside and the nearby lake were all vital elements for flourishing lemon groves, which were often built in terraces into the hillside linked by stone steps and came in a variety of sizes. Huge walls sheltered the rear and sides of the groves, which all faced east-south-east.

Either in the middle or at one end of the groves was a sort of shed which housed the materials used to construct the winter shelters.

The wooden chestnut beams of the roof structures, resting on stone pillars, sloped backwards and were latticed with five or six parallel rows of slender beams.

With the first November frosts the lemon groves were transformed into giant greenhouses, complete with a roof, glass front walls to let the light in and doors, all carefully numbered. 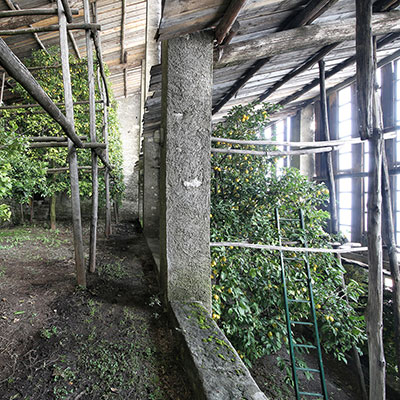 The pine frames were nailed together to provide supports for the glass windows and were mounted lengthways, held together by wooden lynchpins, while the doors were made of plain planks nailed onto three cross bars and provided with hinges to allow them to be opened.

The lemon groves had to be snugly transformed into greenhouses by November in order to protect the trees from the cold.

Lawrence dedicated ample space to his production of lemons, struck by the skills of the carpenters in covering the greenhouses, “men who went easily, from pillar-summit to pillar-summit with a great cave of space below”. Even a visit inside the lemon houses amazed him:

“the plants seem to disperse in the darkness… Here we are trees, men, pillars, the dark earth, the sad black paths, shut in this enormous box… I often lie in bed and watch the sunrise. The lake lies dim and milky, the mountains are dark blue at the back, while over them the sky gushes and glistens with light. At a certain place, on the mountain ridge, the light burns gold”.

Today the discovery of local traditions is one of the joys of a stay at Lefay. The Resort enhances the culture and history of the area by recommending a selection of activities that start with a visit inside the lemon houses.

Why diets don’t work while listening does: ...

Psychological effects on the outward appearance